Breaking News
UK denies visa to Iranian Tennis player, misses Wimbledon‘UK not giving up on Hong Kong’ depicts British Empire mentality but the World has changedRead here: This is what US has been providing to Ukraine, details of arms, ammunition dropped since conflict broke outInfo of over 3 lakh Israelis leaked in cyber attack by IraniansIran: Five dead, dozen injured in 6.1 magnitude earth quake
No Result
View All Result
No Result
View All Result

ISLAMABAD, Jan 08, (Asia Free Press): At least 21 people froze to death at the hill station Murree in the outskirts of Islamabad on Saturday, after the cars were stranded in snow amid a surge of tourist influx.

Around 1,000 cars were stuck on the hill station while the chief minister of Punjab province issued instructions for expediting rescue work and providing aid to the stranded tourists.

According to a list issued by Rescue 1122, 21 people died, including nine children. 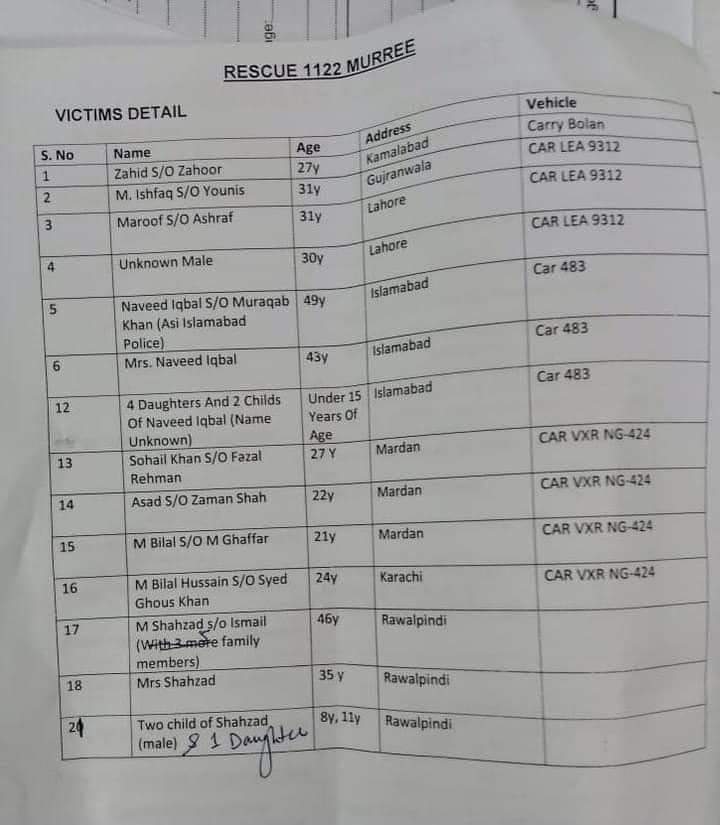 In a video message, Pakistan Interior Minister Sheikh Rashid said tourists had flocked to the hill station in such large numbers “for the first time in 15 to 20 years, which created a big crisis”.

He said Rawalpindi and Islamabad administrations, along with police, had been working to rescue those stranded, while five platoons of the Pakistan Army, as well as Rangers and Frontier Corps, were called on an emergency basis.

The minister said that around 1,000 cars were stuck on the hill station, confirming that “16 to 19 deaths have occurred in their cars.”

Rashid said that residents of Murree provided food and blankets to stranded tourists, adding that the administration had closed all routes to the hill station and was now allowing only vehicles planning to take food and blankets.

“God willing, we will rescue 1,000 cars by evening today. We have decided to stop people [travelling] on foot as well. It is no time for [pedestrian] tourists to visit.”
The Pakistan Meteorological Department had predicted heavy snowfall in Murree and Galiyat from January 6 to 9.

Heroic Tale of a Pakistani SULTAN in 1971 War

Pakistan summons Indian diplomat over killing of Muslims in Assam

Read here: This is what US has been providing to Ukraine, details of arms, ammunition dropped since conflict broke out

Read here: This is what US has been providing to Ukraine, details of arms, ammunition dropped since conflict broke out

No Result
View All Result